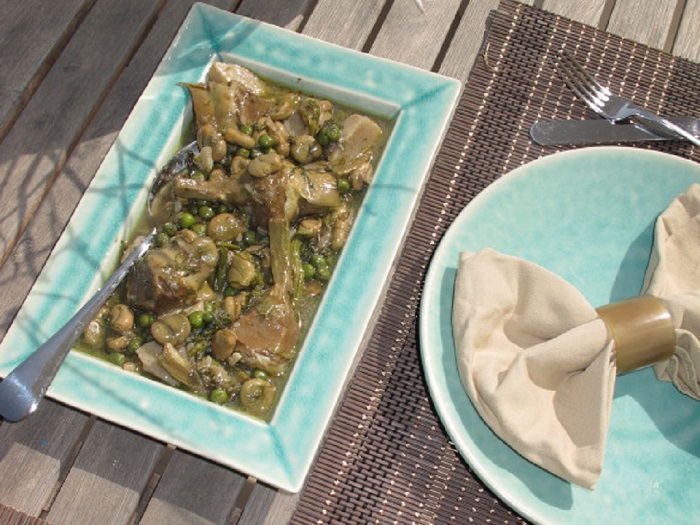 Artichokes with Broad Beans and Peas

The seasonality of food has always been the way most Greeks cook by. By this I mean that at certain times of the year a given type of food is at its freshest and so tends to be tastier and more nutritious. Consequently, it tends to be less expensive to buy as well. I remember when I first arrived in New York and spotted some watermelons in a super market window and thought to myself as it was still March, ‘indeed this is the land of plenty were you can have anything you want!’ Only to be disappointed when I ate a piece of the watermelon later.

Spring time is very special time for me as artichokes are in season and soon after broad beans are also ready to be eaten. This time is especially beautiful as the fire flies are teeming the countryside and you have nature’s nightly disco on display! My mother makes a dish with these 2 ingredients that has a history as old as Greece itself. Both originating around the Mediterranean, with most of the southern Europeans feasting on them when they’re in season. Broad beans have been cultivated 8000 years ago if not before, while the artichoke were cultivated in Sicily when the Greeks controlled most of that island which was part ofMagna Grecia. Artichokes are actually a flower bud – if allowed to flower, blossoms measure up to seven inches in diameter and are a violet-blue color. Artichokes are a close relative to the thistle.

When the hotel opens in May, we often serve this dish to our hotel guests and although most of them have never tried it before while some have never even heard of it; once they cautiously taste it, they are soon converted by its succulent flavours.

The following recipe is simple enough but finding the ingredients should you not be living around the Mediterranean will be a quest in itself! Of course, you can make it with frozen artichokes and frozen broad beans but I would say you lose more than half the flavour and aroma of the dish not to mention most of the nutrients. Maybe that’s why I love it so much, I can only have it around the month of May. But I adore this dish so much that I would have my mother make it even out of season, but not often!