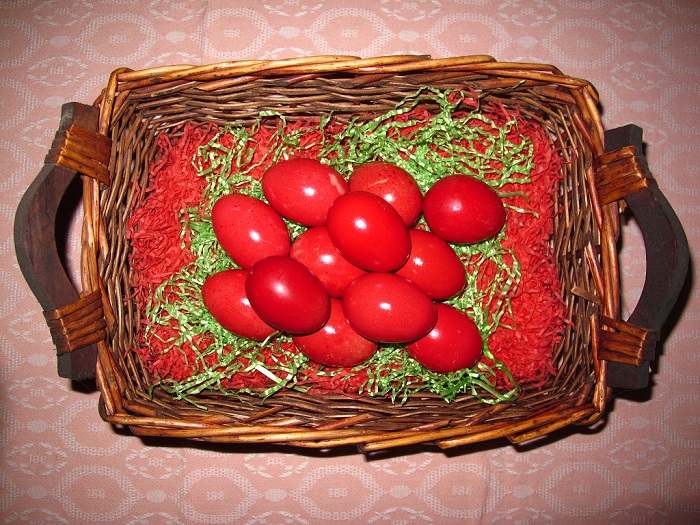 A few days before Greek Easter, my mother would be dyeing eggs red to have them ready for our Easter table. This would be one of her chores to prepare for our Greek Orthodox Easter celebrations. This year as I am alone in the house and as I was kindly given some fresh eggs by a neighbour, I thought I would dye them myself, I mean, how hard can it be?

After the midnight resurrection Mass and on Easter Sunday, children and adults would ask the question, “Na tsoungrisoume?” meaning, “Shall we crack them?”.   These freshly boiled and painted eggs which would be laying in a basket from Holy Thursday when they are traditionally made.  Unfortunately, these eggs could not be eaten until after the church service on Saturday night, due to the observation of Lent, and consequently they would be a welcome treat after our fasting.  The ritual would be as follows, one person would hold his egg in a fist with the pointy end exposed while the other taps it while saying the words, “Christós Anésti!” meaning “Christ has arisen!”  The other would reply, “Alithós Anésti!” meaning “Surely he has arisen!”  The same would be done on the other end.  The one who would have his egg whole and not cracked would be assured one year’s worth of good luck!  The other would have a cracked egg and possibly high cholesterol!

The dyeing of the egg red has many symbolic connotations and using the egg as a medium for this symbolism has a history as old as man himself.  The egg represents among other things a rebirth of the earth during springtime just as the resurrection of the Jesus represents the promise of everlasting life.  First used as a religious symbol in Persia in about 500 BC, noblemen would carry painted eggs to celebrate the spring equinox. The deep red color symbolizes the blood of Christ shed on the Holy Cross while the hard shell of the egg symbolizes the tomb of Christ.  Thus cracking it represents his resurrection.

Another reason I was told for the eggs being red when I was young was that when Mary Magdalene visits a Roman emperor and greets him with “Christ has risen”.  The emperor replied that Christ can no more rise again than this egg can turn red.  At that point the egg in his hand turned blood-red. Although many use red onions to dye the eggs I will cop out for a more easier and reliable method.  The Greek red egg dye can be purchased at any store that sells Greek items.