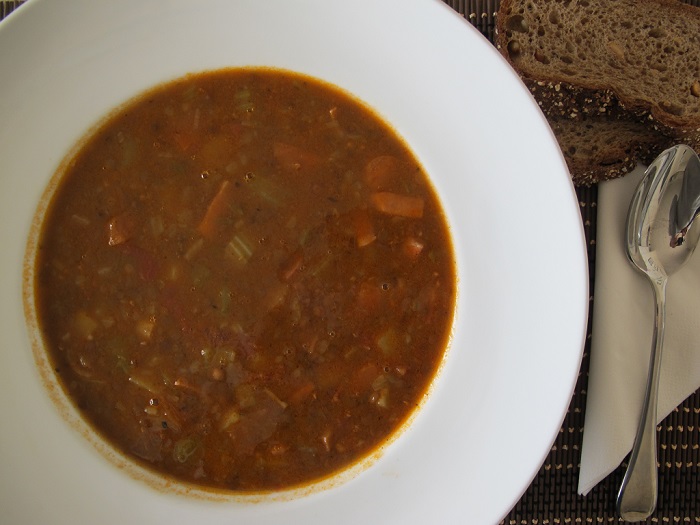 Lentils have been eaten by mankind (women more than likely planted them, gathered them and cooked them in those early days) for over 10,000 years. It was a very easy dish to prepare with very few ingredients and of course, it is loaded with protein and iron, so if the men came back from the hunt empty-handed at least they had a warm lentil soup waiting for them that was totally nutritious! Another very Greek and traditional soup made from legumes is Fasoulada, Greek Bean Soup.

I owe this recipe to my friend Paul! A very long time ago, I made him a gift of a few bags of Greek lentils and promised to show how to cook them so it is about time I honored this vow! Greek Lentil Soup is called ‘Fakes’ in Greece, and is a very simple dish to make. You may see it in other blogs as Faki but that is just one lentil which would make a very watery soup.

Traditionally this soup does not contain tomatoes as they were brought over to Europe at the time of Columbus, nor were the carrots and celery added, which is more than likely the reason why I did not eat it when I was young however much my mother tried to force it on me and my sister, she did not like them when she was young, as well. In my village, most people still eat lentils this way! and some children will still say no to them.

The recipe below is a fairly modern version of the Greek traditional dish but I adore it non-the-less and I’m happy to say most of my hotel guests adore it as well regardless of whether or not they have tried the soup before. It’s the kind of soup that you can add things to it and it will still work. I know some people to have add bacon, chicken or just the broth, or many other types of vegetables and yet the soup is always delicious.