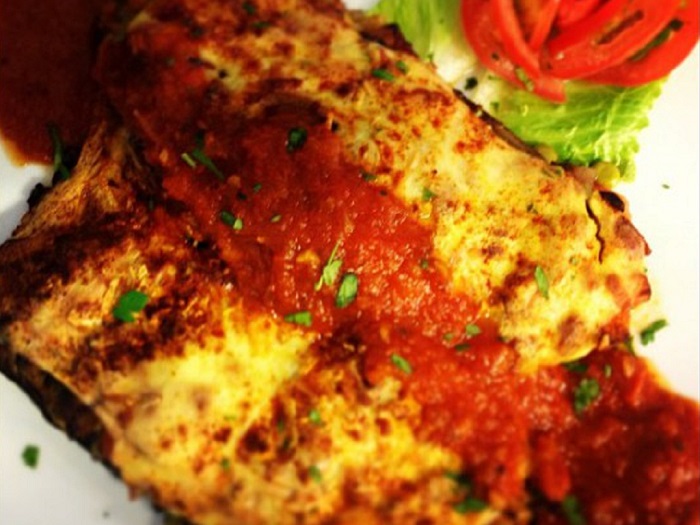 Theodora rules the kitchen of the Nafsika Hotel and a small introduction is required before we talk about Moussaka. She has been in the Nafsika kitchen since it opened in 1978. She lost her mother at the age of nine, she had to take care and cook for her older sister and her family while her sister went out to the fields to work. This along with her strong natural character made her the success she is today. She was a housewife who ended up running the Nafsika Hotel kitchen – serving up to 250 meals a night! Obviously, she was not trained for this nor ever in her wildest dreams had she thought she would be doing this.

Her reputation as a cook is revered by her fellow towns people and beyond to the many tourists that grace Agios Stefanos, but! Just yesterday, John a guest who has been coming to Agios Stefanos for 20 years, said to me, “I had forgotten what good food tastes like!” after trying one of Theodora’s dishes.

Moussaka is a dish that is normally associated with Greece though its variations are part of national Balkan cuisines and has an Arabic name, in the West it is best known in its Greek form and while most people think that all Greek homes make Moussaka the truth is that it is a dish that was mainly made in Athens due to a man called Nikolaos Tselementes. He was a Greek chef of the early 20th century whose book, Greek Cookery, was the first complete cookbook in Greece. He is considered one of the most influential cookery writers of modern Greece. The modern Greek version of moussaka was probably invented by him in the 1920s. Because of this Athens probably makes the best Moussaka and while today in Greece everyone makes Moussaka. When my mother first started to cook hardly anyone made Moussaka outside Athens and the major cities. In other words it was not a peasant meal but a city dish. My mother was taught by a relative who lived most of her life in Athens and thus Theodora learned to make Moussaka.

Moussaka is a casserole made by layering aubergine(eggplant) with a spiced meat filling then topping it off with a creamy Béchamel sauce that is baked to golden perfection. This aubergine(eggplant) version is the traditional rendition taught to Theodora by her great aunt from Athens, however you can also layer in potatoes, courgette(zucchini), or whatever vegetables you prefer. It’s hearty and filling so you won’t need many side dishes. Sometimes Theodora uses lentils instead of mince meat to make a vegetarian Moussaka! While it can be time consuming to prepare, I think you will find that once complete it is a very worthwhile endeavor.