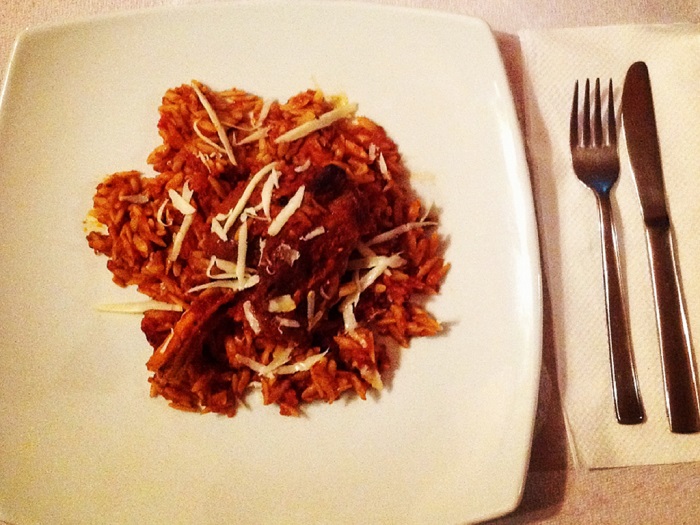 This is one of Greece’s most popular ‘Sunday roast’ and restaurant lamb dishes and yet many tourists that visit Greece each year don’t even know about it. It is often on the menu in truly authentic Greek tavernas, but with the coming of mass tourism in Greece in the 1960’s, it’s now by passed by dishes such as Stifado and Kleftiko. The dish is called Giouvetsi (Γιουβέτσι) and it conjures to me fond and cherished memories, as with most Greeks, of my mother doing it for the Sunday table. Incidentally, I had this dish on our hotel menu for 2 years but sadly it was not moving, so I decided to take it off.

This dish is traditionally cooked in a clay earthenware casserole pot, a γάστρα (gastra) in Greek, which creates the distinct taste and nutritional value of food cooked in them. For generations mothers used to wake up early on Sunday, the day of rest for most, to prepare this dish and take it to the baker where they would give him their ‘gastra’ to bake after he finished baking the bread, using the remains of their hot wood-burning brick oven. In my mothers island of Ereikousa, they did not have a baker but each household had a brick oven in which they would take turns to bake the bread for that day. In this way, the women would not need to heat their oven every day but only when it was their turn so that on each designated day the women would take their bread to the oven that was working. After the bread was baked, they would put the ‘gastra’ in the oven and leave it cooking slowly until it was ready to have their lunchtime meal.

Looking on-line at other people’s contributions to the Greek Bean Soup (Fasoulada), I noticed that many dishes do not resemble the way most Greeks would cook it. Many added more vegetables than normal or more tomatoes since the Fasoulada looked too red in color. I’m quite sure that these dishes tasted just fine and I’m not saying the Fasoulada in these other recipes is wrong (though, I would say the recipes are more a Greek-Style Fasoulada) where as this version here is a more traditional version or should I say Theadora’s Fasoulada. Notice that there is no garlic in this version. Theodora says that garlic is added only to Fakes (Greek Lentil Soup). I also like to add a few drops of Tabasco just before I eat it as I like it a bit spicy!

There is normally one pasta used for this dish, it is orzo pasta (or in Greek ‘κριθαράκι – kritharaki’). This rice shape pasta is traditional for Giouvetsi and many a people have confused it for rice but this time my mother used another Greek pasta called ‘κοφτό – kofto’ which is similar to the Italian pasta Ditalini. She prefers this pasta since you use less of it and it absorbs more of the luscious sauce. Most people can name quite a few Italian types of pasta but the Greeks have their own types which they use for their dishes and few people realize how many different Greek dishes are made with pasta. On the island of Corfu since it was under Venetian rule rather than under the Ottomans, pasta was often used, which is why we have many pasta dishes. No one really knows where pasta originates but I would not be too surprised if the ancient Greeks had something to do with it!

Even though there are many British people who love pasta, I don’t think it is as popular as the mighty potato! This past summer, a person who stayed with us and loved the hotel, on a Tripadvisor review he wrote, ‘only complaint… there was quite a lot of pasta dishes’! Which reminds me of the Spaghetti Harvest – April Fool’s Day Hoax in 1957 which generated an enormous response. Hundreds of people phoned the BBC wanting to know how they could grow their own spaghetti tree!