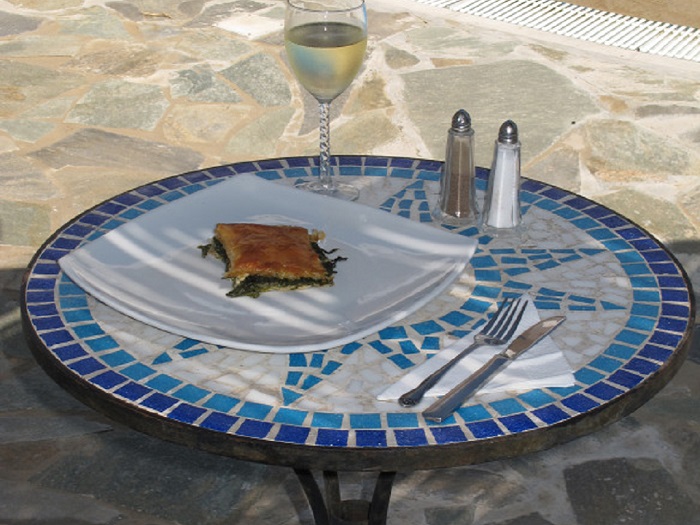 I can’t in all honesty say that my mother’s spinach pie is any better or different than the whole range of spinach pies that are made around Greece, although to be fair a lot of people have said that hers was the best they have ever tried! The ancient Greeks would stir in all sort of edible greens and wrap them to make pitas (pies), sadly, we don’t know how they made their pies as today’s spinach phyllo crusted pies first appeared during the Byzantine era. Spinach originated in ancient Persia (modern Iran). The rest of Europe had to wait well into the middle ages before they sampled this richly flavoured green. The English word spinach dates to 1530.

This will probably surprise many that have tried my mothers spanakopita as it is called in Greek but my mother did not make this dish at home and only started to make it when we opened the hotel! Coming from the Diapontian island of Ereikoussa (Erikousa), my mother was taught to make other sorts of pitas (pies) which I will reveal in later articles so when I wanted spanakopita on the menu she had to be taught to make it. Once again, my aunt Marika from Athens came to my mother’s rescue.

So popular was the dish when we first introduced it in Agios Stefanos that my mother had to make 2 pans of 15 portions on each pan a day! Several years later, when we would be selling of smaller amounts of the spanakopita, I wondered why people stop ordering it. Only to painfully realize that the other tavernas had started to sell it as well but as some of them would buy it in pre-made and frozen pockets of spanakopita, these would taste nothing like my mother’s homemade version so people would be dubious to try our spanakopita once they tried one of these other ones. How I would pine when I heard them say to me, “I have tried it before and don’t like it”!

My mother’s recipe is a bit different from all the others I have seen on the net but my mother told me that she started making it like those others but the recipe has evolved to the present one.